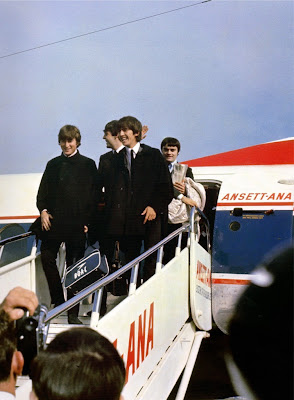 Following the less-than-fulfilling Hong Kong concerts, The Beatles gathered at Kaitak Airport on the afternoon of June 10th, 1964. Bob Rogers taped some interviews for his station, 2SM in Sydney, the city they were headed to.
Coverage of the events of June 11th, as they touched down on Australian soil in Darwin and then deplaned in Sydney, can be found here. The morning of the 12th found them back in a plane, winging their way west to Adelaide. Rogers taped more interviews on the plane, including a short chat with Jimmy Nicol, on his last full day as a Beatle.
At 1pm, the group congregated on the balcony of Adelaide's Town Hall to wave to a fraction of the 200,000 fans and curious onlookers who had emerged to greet them on the road from the airport into town. The amazing scene was recorded for Australian radio. After hobnobbing with the lord mayor, they held a press conference at their hotel prior to that night's concerts at Centennial Hall.
Posted by DinsdaleP at 7:26 PM