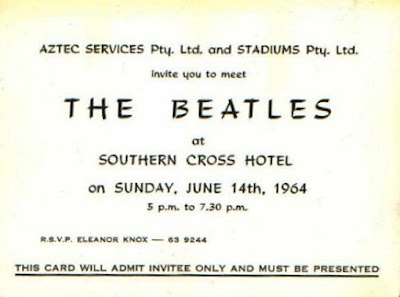 By June 13th, 1964, Ringo finally got the all-clear to leave the hospital and travel to Australia to rejoin his bandmates. BBC News reporter Ronald Burns filmed an interview with the drummer at London Airport as Ringo prepared for the lengthy journey, taking him through San Francisco and on to Sydney, where he touched down on June 14th.
At Sydney's Mascot Airport, Ringo chatted with 2SM Radio's Garvin Rutherford, and he and Brian Epstein filmed a TV interview. Then it was on to Melbourne, where ATN Channel 7 covered the arrivals of Ringo (from Sydney) and the other Beatles (from Adelaide).
John, Paul, George, Ringo, and Jimmy Nicol congregated atop the Southern Cross Hotel, waving to the thousands of fans mobbing the streets below. They returned inside where Derek Taylor presided over the world's first and only "five Beatles" press conference, although Jimmy was largely ignored by reporters.
Following the press conference, John and George were interviewed by Alan Lappin of Melbourne's 3UZ Radio, and Paul was interviewed for Australian TV's People '64.
Posted by DinsdaleP at 4:11 PM