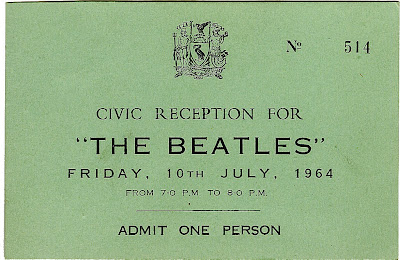 The Beatles had less than a week to rest up from their month-long World Tour before heading back to work, beginning July 6th, 1964 with the London world premiere of their film, A Hard Day's Night.
The next day, they taped a TV performance of the movie's theme song for BBC's Top Of The Pops. Immediately afterward, they filmed an interview for Granada TV's Scene At 6.30, discussing Ringo's 24th birthday and the imminent Liverpool premiere. Around this date, the birthday boy also chatted via transatlantic phone lines with Murray the "K" in New York.
A Hard Day's Night's northern premiere at the Liverpool Odeon on July 10th turned out to be a triumphant homecoming for the Beatles, as 200,000 fans emerged to greet them at Speke Airport, the Town Hall, and outside the cinema. Once again, Scene At 6.30 was there to cover the mayhem and film an airport interview with the hometown heroes.
Posted by DinsdaleP at 3:02 PM