Everything Seems To Be Right 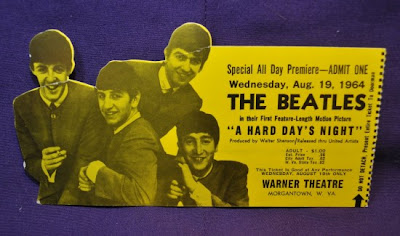 With the London and Liverpool premieres successfully completed, A Hard Day's Night opened in British cinemas throughout the last half of July, 1964.
With positive reviews rolling in and the Beatles due to begin a tour in mid-August, anticipation for the film was high in the USA. Tickets went on sale in New York City on July 22nd, and in Dallas on July 30th. United Artists' radio commercials targeted teenagers and adults alike, and the movie did strong business throughout August and September across North America, complemented by the band's 25-city tour.
Posted by DinsdaleP at 3:44 PM