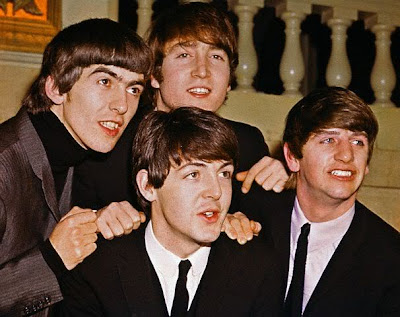 The events surrounding The Beatles' magical appearance on the Ed Sullivan Show of February 9th, 1964, are covered in an earlier blog post.
The following afternoon, after partying well into the night at New York nightclubs and sleeping late. the group assembled at the Plaza Hotel's Terrace and Baroque Rooms to meet the press. Fascination with the Fabs was at a fever pitch, and the day was an exhausting whirlwind of radio, newspaper, magazine, and newsreel interviews, posing for photos, accepting gold records, and pressing the flesh.
Circulating recordings from the event include an Associated Press newsreel interview, a filmed chat with a CBS News reporter, and more stolen moments from Ed Rudy's tape recorder during a cocktail reception. Most enlightening are Fred Robbins's lengthy one-on-one conversations with John, Paul, and George for his Radio Luxembourg show Assignment: Hollywood.
Posted by DinsdaleP at 3:12 PM