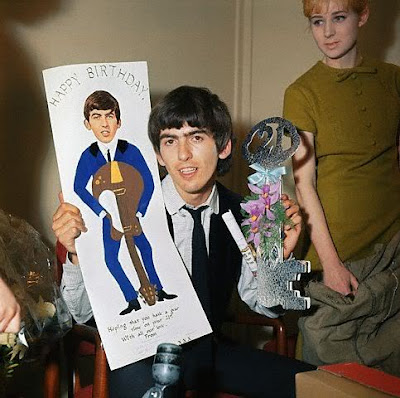 In between their US trip and filming A Hard Day's Night, The Beatles had one week to record newly-penned songs for its soundtrack. The sessions began February 25th, 1964, which also happened to be George Harrison's 21st birthday.
Somehow deemed newsworthy, the event was commemorated at the London headquarters of the Beatles Fan Club. George was photographed and filmed surrounded by mountains of birthday cards and gifts. He was also interviewed by ITV News and BBC News.
Posted by DinsdaleP at 2:37 PM