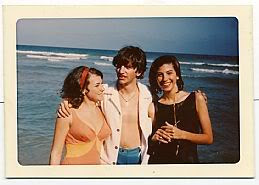 After a full week of sun, surf, and sand, The Beatles bid a reluctant farewell to Miami Beach on February 21st, 1964.
Before departing, they taped a farewell message to the citizens of Miami and the listeners of WQAM-AM. The Maysles film crew captured Paul, George, and Ringo goofing around in their Deauville Hotel rooms as they packed their belongings.
While Murray the K had already been recalled to New York, Ed Rudy was still hanging around; he interviewed Neil Aspinall on the flight to Kennedy Airport, and got some last words from Ringo before the boys jetted back across the Atlantic.
Posted by DinsdaleP at 8:52 PM