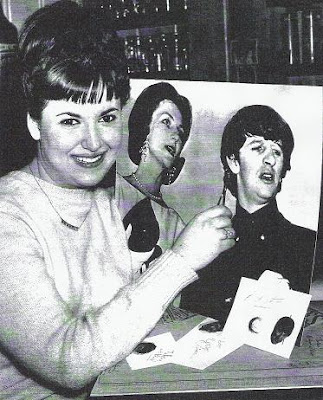 As soon as The Beatles had left WWDC's remote radio booth, Carroll James spoke with a couple of female fans/faithful listeners. James then took the stage of the Coliseum to introduce the opening acts, while Murray the "K" was backstage snagging a pre-concert interview with Ringo.
The performance itself couldn't have gone any better (the recently-unearthed complete video recording is proof positive of that), so it must have been a severe comedown when the group was obliged to follow it up with a visit to the British Embassy as the guests of Sir David Ormsby Gore.
The party started on a silly note as John managed to convince a TV reporter he was Beatle Eric, but the room was filled with the kind of tedious, high society snobs who were anathema to John (in particular) and his bandmates. Not making matters better were Ed Rudy and his cadre of Radio Pulsebeat correspondents asking inane questions and capturing exchanges between Ringo and a British military man.
The last straw came when 18-year-old gate-crasher Beverly Markowitz snipped off a lock of Ringo's hair. Four fed-up and physically drained Beatles soon returned to their hotel rooms, having survived another day in the madhouse that was America.
Posted by DinsdaleP at 4:17 PM