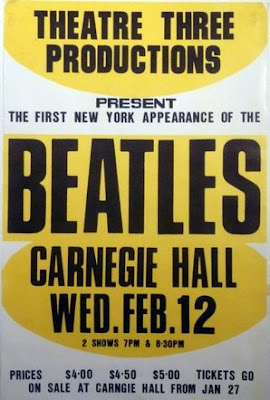 On the morning of February 12th, 1964, The Beatles posed for photos near the US Capitol, then boarded a train bound for New York City.
As they had on the way down, Albert and David Maysles filmed the antics on the train journey, although only Ringo (and to some extent George) had much energy left for clowning around. There is also a brief clip of John noticing some Nazi graffiti in the elevator at Penn Station upon their arrival.
They had scant time to relax at the Plaza before being driven to Carnegie Hall for their second US performance. Ed Rudy was there with his Radio Pulsebeat microphone, capturing their arrival and fans' reactions (including Mrs. Nelson Rockefeller) after the 7pm concert.
Posted by DinsdaleP at 2:43 PM