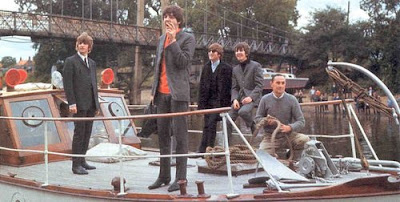 After arriving at London Airport on the morning of February 22nd, 1964, The Beatles had just 24 hours to rest after their American tour before setting off to work again.
The task at hand was taping an appearance on ABC-TV's Big Night Out, shot at Teddington Studio Centre. As part of the show's opening credit sequence, the group was filmed boating down the Thames, a sequence also covered by ITV for airing on that night's newscast (must have been a slow news day).
The show as aired February 29th opened with a Beatles/Winters brothers sketch, followed by the Thames footage, ending in a customs office scene. In addition to miming several songs, the group also read out purported requests from viewers.
Posted by DinsdaleP at 6:58 PM