No Such Thing As An Ex-Beatle 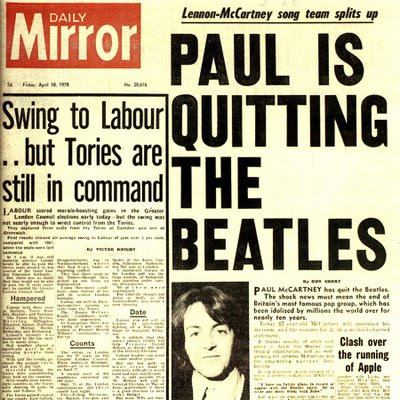 The headline above, from the April 10th, 1970 edition of the Daily Mirror, marked the public demarcation of an estrangement which had been ongoing in private for several months. Paul had issued an information sheet with press copies of his McCartney album that contained some blunt statements about his feelings toward working with the other Beatles, and the media took this as a declaration of independence.
That same day, George was sitting down to film an interview with BBC1 for the religious series Fact Or Fantasy, broadcast on the 26th. Not only does George not refer to a split, he refers to himself as a Beatle during the conversation, mostly focused on spiritual enlightenment.
George's interview was filmed at Apple's Savile Row offices, where the usual Apple Scruffs and curious tourists were supplemented that day by dozens of reporters and photographers, as word of the Beatle breakup spread. CBS News dispatched Bob Simon of their London bureau to cover the story, and the raw footage of his report circulates. It begins with reaction from sad and angry Scruffs in the street (most of whom seem to blame Linda McCartney), and contains a lengthy interview with a shell-shocked (and frankly denial-ridden) Derek Taylor and his assistant Mavis Smith. At the end, Ringo is filmed leaving Apple and entering a car with Mal Evans, to the cheers of the fans outside.
Here are a couple of pertinent airchecks from April 1970: WKNR in Detroit bidding "a fond farewell to our Beatle buddies", and a BBC Radio preview (possibly on Scene And Heard) of three tracks from the McCartney LP, released in the UK on April 17th.
Posted by DinsdaleP at 2:42 PM