Crazy With Nothing To Do 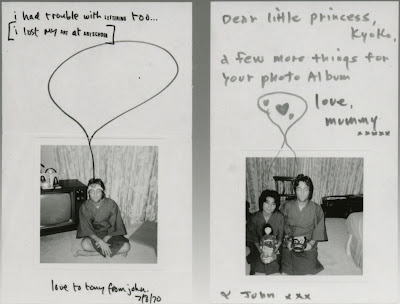 Like his 1968 pilgrimage to Rishikesh, John's four-month course of Primal Therapy in California may not have been spiritually rewarding in the long run, but it did produce a batch of new compositions of the highest quality.
During his stay from late April through early September, John recorded demos of new songs such as "Mother", "I Found Out", "Love", "God", "Well Well Well", "Look At Me", and "My Mummy's Dead". One such tape, from late July, contains several takes of "God", an unreleased song called "When A Boy Meets A Girl", and a "Poem Game" from Yoko.
Also possibly from the same period is a lengthy recording of John and Kyoko improvising songs and stories (some say it dates from the January 1970 Ålborg trip, but I find it unlikely John had a Rhythm Ace with him in Denmark).
Posted by DinsdaleP at 3:49 PM