It's Really A Pity 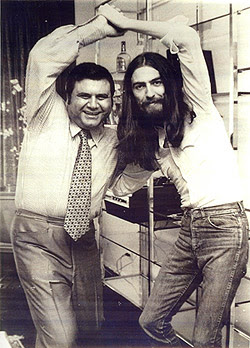 On April 23rd, 1970, George and Derek Taylor flew to America for a 12-day visit, attending to business at Apple's newly-opened New York office on Broadway. George also dropped by Columbia Studios on May 1st to sit in on a recording session with Bob Dylan.

The following day, at the Apple office, George sat down with Village Voice reporter Howard Smith for a lengthy interview, aired on WPLJ radio. Naturally, the focus of the conversation was the future (or lack thereof) of the Beatles as a working group. George is surprisingly optimistic, refusing to rule anything out, while Smith remains skeptical that they will be able to repair the obvious rift between Paul and the others. After sharing his opinion on the McCartney LP, George reveals that he's preparing to begin recording his own solo album with Phil Spector in a few weeks.

John and Yoko had also planned to begin cutting an album with Spector that spring, but Primal Therapy with Arthur Janov effectively moved everything else in their lives to the back burner for a few months. They also flew to America on April 23rd, settling in Los Angeles where they would undergo a course of therapy that would keep them out of the spotlight through the spring and summer.

Meanwhile, the "Let It Be" single was topping charts around the world, promoted by a clip similar, but not identical to that seen in the movie Let It Be. In addition to airings on the UK's Top Of The Pops (March 5th) and Germany's Beat Club (March 28th), "Let It Be" also cropped up on the Australian series Hit Scene May 2nd, along with brief looks at the Wedding Album and Hey Jude LPs: