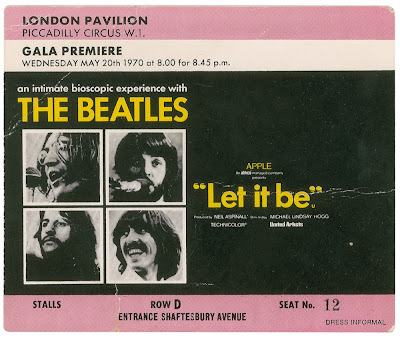 The profoundly anticlimactic film Let It Be premiered May 20th, 1970, simultaneously in London and Liverpool. None of the Beatles attended either British premiere, nor did John attend the American premiere on May 28th. Reviews and box office sales were lacklustre, although it won an Oscar for Best Original Song Score.
The movie was promoted by trailers and commercials of various lengths (60 seconds, 30 seconds, 15 seconds, and 10 seconds). United Artists also issued an unusual one-sided promo single, Dialogue From The Beatles' Motion Picture "Let It Be", which I can't imagine any station adding to its rotation. The final Beatles single, "The Long And Winding Road"/"For You Blue", was issued in the US May 11th and became their final #1 hit on Billboard by June.
BBC Radio aired two specials soon after the movie was released. The first, broadcast May 23rd and entitled Let It Be, examined not only the music from the film, but the group's now uncertain future. The June 27th edition of Film Time featured an interview with Dick Lester about all the Beatles' films, and included vintage 1964 Beatle chats from Movie-Go-Round.
Posted by DinsdaleP at 2:11 PM