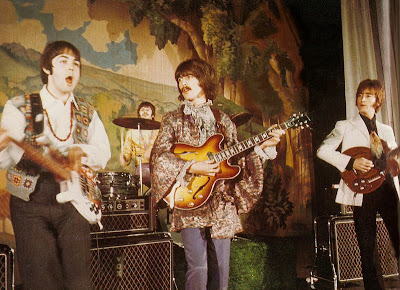 I seem to have already posted most of 1967's remaining interviews and spoken word bits, so here's a quick recap:
John and George pontificated about Transcendental Meditation on The Frost Programme September 29th and then again on October 4th.
In mid-November, John appeared on BBC Radio's Where It's At, chatting with Kenny Everett and Chris Denning about Magical Mystery Tour.
On November 28th, the Beatles recorded their fifth (and in my opinion, funniest) Fan Club Christmas Message:
Early in December, George spoke about Ravi Shankar and Indian music in general on the PBS series Public Broadcasting Laboratory.
Posted by DinsdaleP at 8:33 PM