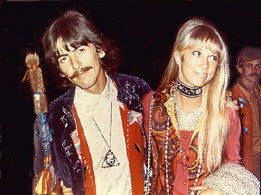 The Summer of Love rolled along as July 1967 turned to August. Just two days after returning from Greece, George and Pattie Harrison (accompanied by Neil Aspinall) flew to Los Angeles on August 1st, where they would spend a week visiting Derek Taylor. Taylor's tardiness that first evening inspired the composition "Blue Jay Way".
Most of the week was dedicated to Ravi Shankar, as George visited his music academy on the 2nd, held a joint press conference with Ravi on the 3rd, attended Shankar's Hollywood Bowl concert on the 4th, and stopped by tabla player Alla Rakha's recording session on the 5th.
On August 8th, the Britishers made an enlightening (in a disappointing sense) visit to San Francisco's Haight-Ashbury district. Later that night, George, Pattie, and Neil flew to New York for a one-day stay before returning to London. Shortly before their flight home on the 9th, George stopped by WOR-FM's studio to grant an interview with Murray "the K" Kaufman, who seemed to have eagerly adopted and embraced the hippie way of life.
Posted by DinsdaleP at 6:54 PM