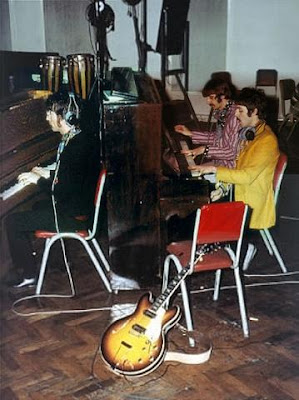 As winter turned to spring in 1967, the Sgt. Pepper sessions were drawing to a close. After four months with nary a peep from the Beatles (apart from a groundbreaking single), it was BBC Radio's Brian Matthew who returned with news from the front following his visit to EMI Studio 2 on March 20th.
His first task was to record John and Paul accepting three Ivor Novello awards, and discussing the winning songs, all Lennon-McCartney compositions. The recording would be played back during the ceremony on March 23rd and subsequently aired on BBC Radio March 27th.
Brian then chatted with John and Paul about the upcoming LP, and the future of the Beatles' concert career, for Top Of The Pops, sent to BBC Radio's overseas customers for broadcast in America and other markets.
Posted by DinsdaleP at 1:43 PM