It's A Mystery To Me 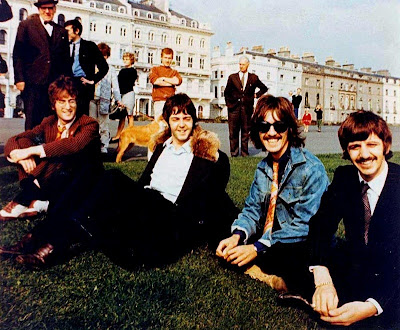 In the immediate aftermath of Brian Epstein's death, the Beatles' future was in question. The seeds for Apple Corps had already been planted, and Brian's brother Clive would succeed him as the head of NEMS Enterprises. Beyond that, Paul took the reins in leading the group into the studio and then on location for the Magical Mystery Tour project.
They spent the week of September 5th-8th, 1967 working on songs for the film at EMI, then piled into the big yellow motorcoach on the 11th to begin filming. The next afternoon, as the cast and crew stopped for lunch at Plymouth's Grand Hotel, BBC reporter Hugh Scully tried in vain to get Paul to describe the project for viewers of Spotlight South West.
On the 13th, George sat down with Miranda Ward and went into much greater detail about the reasons for the film, as well as his latest spiritual developments, for Scene And Heard. Ward chatted with Ringo the next day about far less weighty matters.
The second week of shooting was centered around a single location, West Malling Air Station in Kent. When it was done, the group returned to EMI for further recording dates. 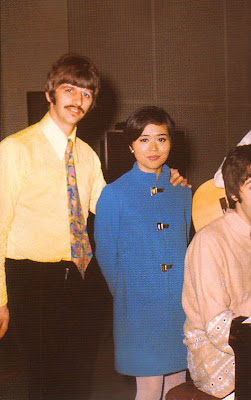 September 25th found them recording "The Fool On The Hill", with reporter Rumiko Hoshika and photographer Koh Hasebe visiting from Japan. The lengthy tape of Rumiko's interviews, as well as "Fool On The Hill" rehearsals, only circulates in atrocious sound quality. Far easier on the ears are these messages to Rumiko, recorded sometime after her earlier visit to London (she had attended the session for "It's Only Love" on June 15th, 1965).
Posted by DinsdaleP at 4:14 PM