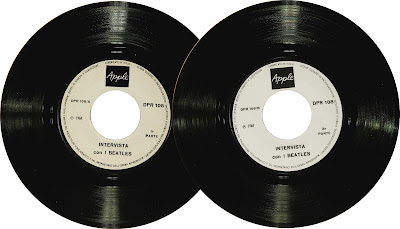 The "White Album" sessions got underway May 30th, 1968 at EMI Studio Two. The first three dates were spent recording a version of "Revolution" which would end up split in two parts as "Revolution 1" and "Revolution 9".
On June 5th, the Beatles started work on Ringo's first composition, "Don't Pass Me By". The next day, as the others worked on overdubs in Studio Two, John sat with Victor Spinetti in Studio Three for a filmed TV interview. John's books had been adapted by Spinetti and Adrienne Kennedy into a stage play, In His Own Write, which would be opening soon at the Old Vic. Peter Lewis talked with John and Victor about the production for BBC2's Release, broadcast June 22nd.
With that done, John sat down "cross-legged on his amplifier", strumming a fretless guitar, and bantered amusingly with BBC Radio's Kenny Everett. When they had finished overdubbing, the other Beatles joined the fun, playing and singing impromptu jingles for Kenny. An abbreviated version of this recording, overlaid with sound effects, was heard on The Kenny Everett Show June 9th. A longer edit was released on a promotional Apple single, Una Sensazionale Intervista con I Beatles. Here is the unedited tape of the interview, complete with narration by Kenny's tape recorder-owning chum Tony Olivestone.
Posted by DinsdaleP at 1:12 PM