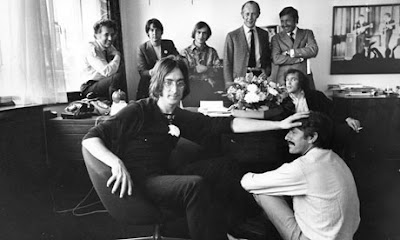 As soon as they had begun, the "White Album" sessions were put on hold when George and Ringo flew to California on June 7th, 1968. During a visit to Big Sur on June 10th and 11th, George participated in filming for the documentary Raga, featuring Ravi Shankar:
Until George and Ringo's return on June 18th, John and Paul worked largely on individual efforts. They held sessions at Abbey Road to work on sound effects for "Revolution 9" and the play In His Own Write (John), and to record "Blackbird" (Paul). Rehearsals of the latter, from a June 11th session, were captured in a short promotional film, Apple, directed by Tony Bramwell:
Meanwhile, John and Yoko planted acorns for peace as their contribution to the National Sculpture Exhibit, attended the opening of In His Own Write, and produced a pair of short films, Two Virgins and Film No. 5 (Smile):
On June 16th, Paul taped a TV appearance with Frankie Howerd, introducing Apple's latest signing, Mary Hopkin. Then it was his turn to fly to California and promote Apple on the West Coast, staying from June 20th through the 25th and talking with Bobby Dale about the fledgling company.
Posted by DinsdaleP at 2:46 PM