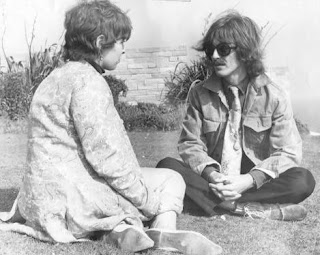 On September 13th, 1967, The Beatles were on location in Newquay filming Magical Mystery Tour. BBC Radio dispatched Miranda Ward to the Atlantic Hotel where the crew was based, and she recorded a long interview with George for Radio 1's Scene And Heard.
The first portion of the interview was transmitted September 30th, on the inaugural day of Radio 1 programming. Much of this was re-aired in 1988 on The Beeb's Lost Beatles Tapes, but I've reinstated missing portions from a recent TV interview with Miranda. The second segment was aired October 7th, and only survives from a fair-quality off-line recording. Here are both segments:
George and Miranda
On September 14th, Miranda chatted with Ringo at the Atlantic Hotel. Here's an excerpt from that interview, originally aired on Scene And Heard October 14th:
Ringo and Miranda
Posted by DinsdaleP at 3:59 PM