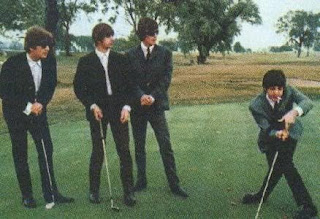 Back in 1964 Art Schreiber was news director at KYW-AM in Cleveland, which was owned by the Westinghouse Broadcast Network. Schreiber often doubled as national correspondent for Westinghouse, covering high‑profile stories and rubbing elbows with the day's biggest newsmakers.

During his career Schreiber filed radio reports on the presidential bid of John F. Kennedy, Kennedy's funeral, and Lyndon Johnson's rise to the presidency. He covered NASA and the first manned space flights. He reported on race riots in Chicago, New York, Los Angeles, and Miami and he covered Martin Luther King Jr.'s march from Selma to Montgomery and James Meredith's march through Mississippi for voting rights.

That he got the Beatles assignment was something of a fluke. A competing radio station had won a sponsorship bid to bring the Beatles to Cleveland as part of the band's tour. To avoid getting lost in the roiling dust cloud of Beatlemania, Schreiber suggested that he be placed on the band's tour as the national correspondent for the Westinghouse Broadcast Network. The network's Washington bureau chief hated the idea, insisting that Schreiber cover the national Democratic convention in Atlantic City.

"He told me a serious newsman can't lower himself to cover the Beatles," Schreiber said. "I told him it's a sociological phenomenon and we ought to do it." Schreiber also assured him he could manage both assignments.

Westinghouse Network officials gave Schreiber the go‑ahead. He joined the Beatles entourage in New York, straight from the Democratic convention, missing only a few of the tour stops. He remained with the Beatles for the better part of a month and got to know each of them personally.

"John Lennon and I sat together on the chartered plane almost every night," Schreiber said. "When John found out I traveled with Kennedy and King, he couldn't get over it and kept wanting to talk about politics and religion and what was happening in America. He was an intellectual."

When not deep in conversation with Schreiber, Lennon and Paul McCartney passed sheets of paper back and forth as they crafted songs. "The floor of the plane was just littered with the stuff," Schreiber said. "I could have picked up those scraps and they'd be worth big money today."

Among his fondest memories are nightly Monopoly games he played with Lennon and George Harrison. "When we'd arrive at a hotel, I'd no more sooner get in my room and the phone would ring and it would be John Lennon. He'd say, 'Art, where are you; we're waiting.' So I'd go to his room and he and George would be sitting there at the Monopoly board. John always stood up to shake the dice and roll. He wanted so badly to get Park Place and Boardwalk. He could stand to lose the game, as long as when he lost he had Park Place and Boardwalk."

Harrison was true to his reputation as the quiet Beatle. He was preoccupied with acquiring the B&O Railroad. "I asked him why he wanted the B&O so badly, and he never did tell me. He never did tell me much of anything. We'd play until sunrise, and I'd be falling asleep at the table, and John would poke me and say, 'one more game, Art.' During this whole time George would say practically nothing."

Sleeping late was out of the question for Schreiber, who had to file fifteen radio spots each day. His reports focused on all manner of things Beatle: what they had for breakfast, lunch, and dinner; how the crowd and individual fans reacted to them at concerts; how the security was managed; interviews with local DJs who aired Beatles music; and near daily interviews with the Beatles themselves.

He also reported on the assortment of things that fans threw on stage during the Beatles' shows. Airborne projectiles included cakes, jelly beans, various articles of clothing--particularly women's undergarments--and pieces of jewelry.

Here are some of Art's interviews from the 1964 tour:

Posted by DinsdaleP at 8:25 PM