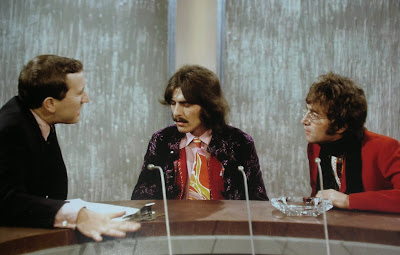 After the twin triumphs of Sgt. Pepper and "All You Need Is Love", The Beatles were bound to hit a fallow patch, especially after the death of Brian Epstein. In addition to filming the ill-fated Magical Mystery Tour and opening the even iller-fated Apple Boutique, they spent the autumn of 1967 learning Transcendental Meditation from the Maharishi Mahesh Yogi, with only George seeming completely devoted.
He and John appeared on The Frost Programme September 29th to promote the practice of TM, explaining the discipline to a skeptical but patient David Frost. They would make a more contentious return the following week.
Posted by DinsdaleP at 3:01 PM