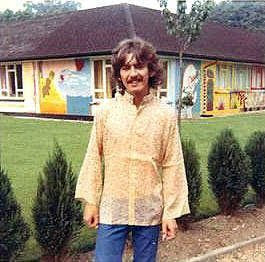 In 1967, George never missed a chance to talk about his twin passions of Indian music and spirituality. Early in December, he sat down with Alan Freedman to film an interview for US public television. December 10th was Human Rights Day, celebrated by a concert at the UN General Assembly in New York featuring Ravi Shankar and Yehudi Menuhin. George spoke about Ravi and Indian music in general, even admitting that he's neglected guitar playing in favor of the sitar for a year or more (the situation would reverse in 1968).
The concert and interview were aired on New York's public station, WNDT, on December 10th, as part of the series Public Broadcasting Laboratory (PBL). All that survives is this fair-quality off-air home audio recording:
PBL
Posted by DinsdaleP at 7:44 PM