You've Got A Lucky Face 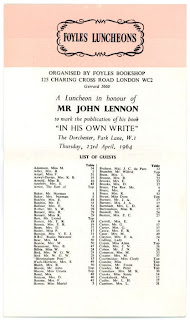 April 23rd, 1964 was a busy day for John Lennon and his bandmates.
After partying the previous night at the Ad-Lib Club with DJ Murray "the K" Kaufman, they had to be on location early in the morning to film portions of the "field scene" in A Hard Day's Night. Murray taped this brief interview while they were setting up the next shot:
Isleworth (not Twickenham)
Nursing a hangover, John then accompanied his wife Cynthia to the Dorchester for a luncheon in his honor, hosted by Foyles bookshop. Despite the wit and wordplay evident in his book In His Own Write, this was all John could manage when asked to give a speech in front of the assembled guests:
Lucky face
The evening was spent rehearsing for the TV special Around The Beatles, at Remembrance Hall. Murray recorded over 20 minutes of the proceedings as The Beatles practiced miming the musical numbers and ran through lines for their Midsummer Night's Dream adaptation:
Muffy the Cow
Posted by DinsdaleP at 12:53 PM