This Girl Just Called Me A Tool! 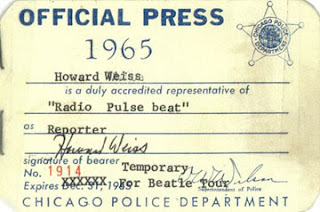 The Beatles' tour blew into the windy city on August 20th, 1965 for two concerts at Chicago's Comiskey Park.
Associated Press cameras filmed some of the afternoon performance:

Between shows, they faced the press as usual:
press conference excerpts
Miami newsman Larry Kane also spoke at length with each of the Beatles backstage after the first performance. Note the ragged state of John's voice:
Larry Kane interviews
Last but not least, here's an... interesting... song someone wrote about the concert:
http://www.youtube.com/watch?v=TwJVHTi7A9Q
Posted by DinsdaleP at 3:01 PM