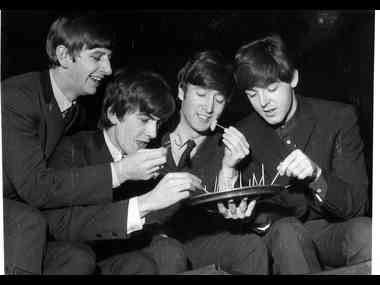 On November 29th, 1963, The Beatles' Autumn Tour stopped at the ABC Cinema in Huddersfield for two performances.
Backstage between shows, the fabs were interviewed for Music Box, a monthly show produced by the Huddersfield Tape Recording Society. The series was played on a closed-circuit broadcast received by several local hospitals. The interviewer, Gorden Kaye, later achieved fame as a TV actor, and The Beatles utterly failed to take his questions seriously, no doubt to the delight of patients:
Music Box
Even funnier are these comments from local fans outside the ABC Cinema:
fan interviews
Posted by DinsdaleP at 3:36 PM