Two Turntables and a Microphone 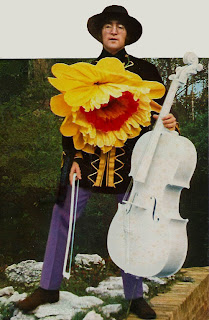 In mid-November, 1967, The Beatles were busy editing and scoring their TV spectacular Magical Mystery Tour. The soundtrack double EP was issued in the UK on December 8th, and John Lennon appeared on BBC Radio to promote the record and film.
The show, Where It's At, was ostensibly hosted by Chris Denning, but Kenny Everett tended to take over where Beatle content was concerned, and this was no exception:
Where It's At
When it was aired on November 25th, the show included a specially-recorded jingle performed by Paul McCartney at the piano (and incorporating riffs from "Hello Goodbye"). The broadcast version is heard above, but here is a longer composite recording from a cleaner source:
All Together On The Wireless Machine

Posted by DinsdaleP at 4:20 PM