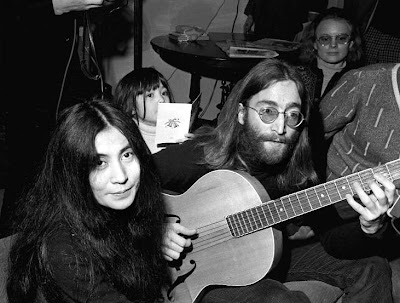 John and Yoko spent Christmas week, 1969, at home in Tittenhurst, ready to usher in Year One A.P. (After Peace). On the 26th or 27th of December, they recorded a message for Canadian radio, promoting the International Peace Festival and sending hope to listeners of the planned "peace network" of radio stations.
Around the same time, as a thank-you to Ronnie Hawkins, who had loaned them his house outside Toronto, John recorded a "Short Rap" and "Long Rap" plugging Ronnie's new single, "Down In The Alley". That Christmas, Canadian radio listeners were also treated to a sneak preview of "Let It Be", as heard on these airchecks from CKLW-AM in Windsor, Ontario.
By December 29th, John and Yoko were back at London Airport boarding a flight to Denmark. They would spend New Year's and most of January, 1970 visiting Yoko's daughter Kyoko at the Ålborg farmhouse where Yoko's ex-husband Tony Cox was staying. Recordings from this visit are covered in an earlier blog post.
Posted by DinsdaleP at 1:12 PM