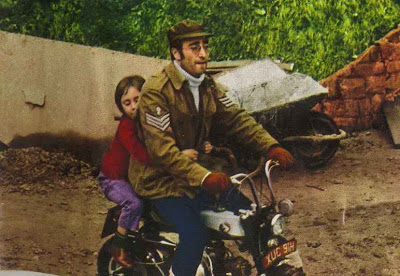 While his bandmates recorded "I Me Mine" and overdubs on "Let It Be" and "For You Blue" in London, John Lennon saw in 1970 with his wife Yoko, her daughter Kyoko, and Kyoko's father Tony Cox in Denmark.
The Lennons spent New Year's at the farmhouse in Ålborg, and held a press conference on January 5th to satisfy the curiosity of reporters wondering what they were doing in Denmark.
Another recording supposedly from this press conference features John and a number of people singing the Danish hymn, "O Kristelighed". Here's a composite recording from a good source and an atrocious one.
Finally, here's a snippet from a cassette sold by Tony Cox containing John and Kyoko improvising stories and songs, presumably recorded during this Danish visit.
Posted by DinsdaleP at 6:45 PM