About Six Or Seven 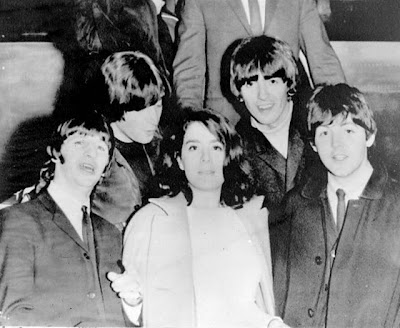 In February, 1965, filming for Help! began on location in the Bahamas. The Beatles and co-star Eleanor Bron flew from London to Nassau on the 22nd, and the boys occupied their time during the lengthy flight smoking some grass they had just obtained.
This explains the silly mood they are in (John and Paul in particular) during a pair of interviews conducted upon their arrival at Nassau Airport. American DJs such as Dave Hull and Murray the "K" flew over from the States to chat with the group during shooting. Lucky enough to be present that first night were Larry Kane and Gene Loving, to the latter of whom John glibly admits, "We got stoned".
Posted by DinsdaleP at 3:22 PM