A Hypocrite On The Make 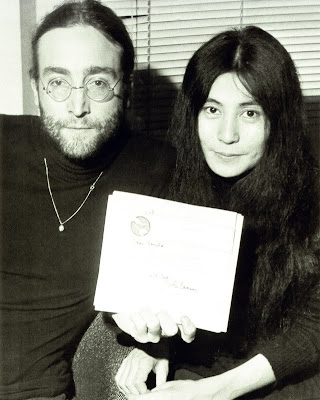 In mid-November, 1969, John and Yoko spent a couple of weeks on holiday, flying to Athens, cruising the Mediterranean with "Magic" Alex, and then stopping by India. John's first action upon returning to London was to send his MBE back to Buckingham Palace (just the medal, the honour was non-refundable), along with this message:

"Your Majesty, I am returning this MBE in protest against Britain's involvement in the Nigeria - Biafra thing, against our support of America in Vietnam and against Cold Turkey slipping down the charts. With love, John Lennon of Bag."

Reuters did send a newsreel crew to interview John at Apple on November 25th, but the novelty of his publicity stunts had begun to wear on the British press and public, and there was little outrage, comment, or reaction to the event.

With this in mind, John and Yoko decided to focus their December peace efforts on Canada (and by extension, the US, where John was still unable to visit). In the meantime, they were interviewed by reporter Ken Zelig on November 27th at their home in Ascot, discussing the MBE return, war in general, and the Christmas season. Around this time, they also chatted with Wolfgang Frank about their recent trip to Greece and a potential visit to West Germany.