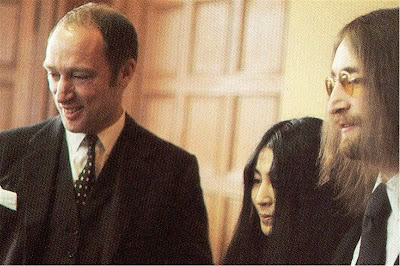 John and Yoko's advertising campaign for peace continued on December 20th, 1969 with a visit to the University of Toronto, where they were filmed by CBS-TV in a long conversation with author and communication theorist Marshall McLuhan. The footage survives but does not yet circulate widely; however, a follow-up interview with a CBS News reporter does exist.
At 10:15 that evening, John and Yoko appeared live on CBC-TV's Weekend, broadcast from their Toronto studio. Host Lloyd Robertson talked with the couple and Rabbi Abraham Feinberg about the planned Peace Festival.
On December 22nd, the Lennon entourage boarded a train for Montreal, where a press conference was held at the Château Champlain hotel. From there it was on to the nation's capital, Ottawa, for a meeting with Canadian prime minister Pierre Trudeau on the morning of the 23rd. As John told the press afterwards, the hour-long summit was fruitful in terms of communication, if nothing else.
That night, John and Yoko flew back to Toronto, where they spoke with rock journalist Ritchie Yorke before returning home to London for Christmas.
Posted by DinsdaleP at 9:56 AM