We Have Got To Get It Together 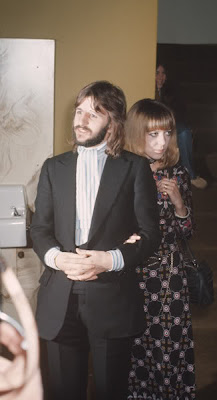 On January 20th, 1970 in Denmark, John and Yoko traded in their lengthy tresses for close-cropped haircuts. During a stopover in Paris on the way back to London six days later, they were interviewed for a Reuters newsreel about the new look and the imminent "Let It Be" single.
The same day, Ringo took a break from recording Sentimental Journey to promote The Magic Christian in America. He and Maureen flew to Los Angeles on the 26th, where a press conference was held at the airport. The following day, Ringo taped a guest appearance on NBC-TV's hit show Rowan & Martin's Laugh-In.
The movie premiered in Hollywood on January 29th, and Ringo made a quick trip to Las Vegas on the 30th to catch Elvis Presley's show at the International Hotel. At some point during his L. A. visit, Ringo filmed an interview with Sam Riddle for Get It Together, broadcast March 7th on ABC. He and Maureen flew to New York on February 1st, returning to London the next day.
Posted by DinsdaleP at 2:04 PM