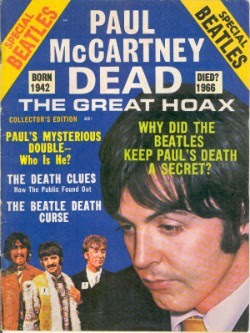 The sublimely ridiculous rumor that Paul McCartney had died in 1966, only to be replaced by a double named William Campbell, had its genesis around the time of Abbey Road's release. The story was fuelled by "clues" on Beatles album sleeves and in song lyrics, uncovered by midwest American college students with too much time on their hands.
On October 12th, Detroit DJ Russ Gibb of WKNR was inundated with callers sharing their discoveries, and Gibb invented several new ones during the course of the broadcast. Two days later, a review of Abbey Road by Fred LaBour in the Michigan Daily college paper fleshed out the cover-up/doppelganger tale.
By the 21st, the story had broken nationwide, as this aircheck from Roby Yonge on New York's WABC proves. The following morning, Paul (or was it?) was headed for his farm in Campbeltown, Scotland for a family vacation. Reached there by Apple's Peter Brown, Paul dictated a quick statement declaring his existence, but it was too late.
WKNR put Russ Gibb on the case, and he talked with Apple spokesman Derek Taylor via transatlantic phone. John Lennon was also reached for comment (the tape played back on WKNR had John Small overdubbing the questions), and seemed to find the whole affair amusing, as well as irritating for stealing the spotlight from his own new releases.
WMCA in New York went one step further, sending Alex Bennett to London, where he caught up with Ringo on the 23rd. The drummer, just back from the USA where the whole tale had started, realizes the futility of trying to "prove" the fallaciousness of a fairy tale.
Finally, the BBC dispatched Chris Drake all the way out to Scotland in hopes of getting some comment from the deceased. His trek to Paul's remote farmhouse was rewarded with an exclusive interview on October 24th. Portions were aired in three different BBC Radio newscasts on the 26th and 27th; here is a composite of all known (off-air) recordings.
Posted by DinsdaleP at 2:41 PM