The World Of John And Yoko 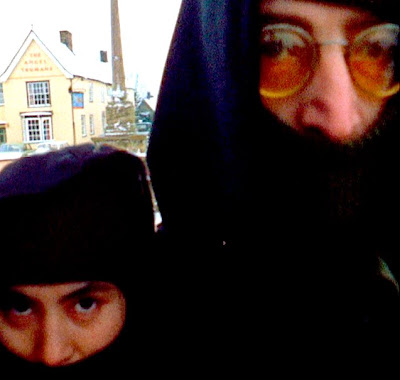 Although they had been rather overexposed in the last nine months, at the start of December, 1969, two British TV companies produced features on John and Yoko.
ATV's was specifically about John, who was anthropologist Desmond Morris's choice for Man Of The Decade in a special broadcast December 30th, just as the 1960's were winding down. Morris visited the couple at Tittenhurst, their Ascot estate, filming an interview there on December 2nd.
Meanwhile, the BBC had commissioned an episode of their series 24 Hours devoted to "The World Of John And Yoko", to air December 15th on BBC1. A camera crew followed the Lennons around for five days (belying the title of the series), beginning on the 2nd by filming the ATV crew as they filmed John and Desmond Morris.
On December 3rd, John and Yoko were filmed at home, noodling on his Mellotron, and en route to Apple. December 4th again followed them from home to work, where they were interviewed by various journalists; an unused clip from this day was released in 2007 by Yoko, who owns all the rushes from the shoot. That evening, they were filmed during a session at EMI Studio 2, taping "Item 1" and "Item 2", two conceptual tracks of laughing and whispering for a potential Unfinished Music album.
December 5th found John and Yoko traveling to Suffolk to film Apotheosis 2, a short film from the POV of an ascending balloon. The BBC's camera even followed the Lennons into their hotel room that night, where they played a verbal round of "Fortunately/Unfortunately"; again, an outtake from this sequence was included in the 1988 film Imagine: John Lennon and on the Lennon Anthology boxed set.
Posted by DinsdaleP at 11:15 AM