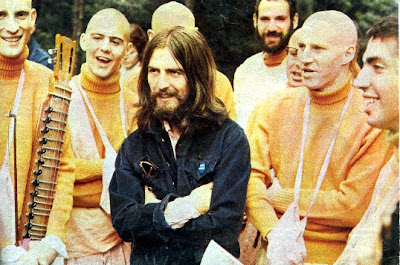 On October 8th, 1969, George Harrison sat down with David Wigg at Apple Corps for a lengthy chat. Topics included the "Hare Krishna Mantra" single, the Abbey Road LP, and John Lennon's recent complaints in the press about the difficulty of extricating his share of Apple's income.
The interview was broadcast in two parts on BBC Radio 1's Scene And Heard on the following Sundays (12th and 19th), and some of the raw tape was released on the 1976 LP The Beatles Tapes With David Wigg. Here is a 22-minute composite using all three sources.
Posted by DinsdaleP at 3:10 PM