The End Of A Beautiful Friendship? 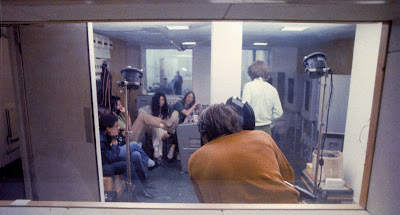 There are, of course, hundreds of reels of Beatles recordings from the January, 1969 Get Back sessions, including dozens of hours of conversation and dialogue. Actual interviews from the period are few and far between.
Filming and rehearsing began January 2nd in a cavernous soundstage at Twickenham Studios. By January 10th, George had walked out, vowing to quit the band, a fact John Lennon doesn't allude to when interviewed on the set January 14th by a reporter from CBC-TV.
News of a Beatle squabble did leak in the interim between the Twickenham and Apple Studios sessions, and Ringo fielded David Wigg's queries about the matter when interviewed en route to Apple on January 21st.
"Magic" Alex Mardas had attempted to create a usable multitrack mixing board for Apple's basement studio, but as this recording attests, the design proved unusable, and equipment was duly borrowed from EMI.
In any case, plans for Get Back, conceived as a live TV and/or concert performance tied in with a "making of" documentary and LP featuring new material, quickly collapsed. The only immediate result was the legendary January 30th performance on the roof of Apple. In this undated interview, Paul discusses the difficulties of tackling a live Beatles show in the post-Beatlemania era.
Posted by DinsdaleP at 4:31 PM