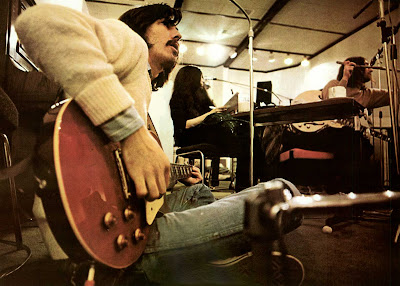 While the rooftop concert was a natural endpoint, the Get Back sessions already had a self-imposed deadline of February 3rd, 1969, Ringo's first day of filming for The Magic Christian. Consequently, the Beatles spent most of February pursuing individual endeavors, uniting only for two sessions at Apple and Trident towards the end of the month.
John and Yoko stayed out of the spotlight, finally surfacing on March 2nd for a live performance at Cambridge University. Paul produced singles for the Fourmost ("Rosetta") and Mary Hopkin:
George was the busiest Beatle, having a tonsillectomy, recording "Under The Mersey Wall" at home on his Moog synthesizer, taping several solo demos at EMI on his 26th birthday, and ending the month with a quick trip to Ottawa.
On March 4th, David Wigg visited George at Apple HQ and interviewed him for BBC Radio's Scene And Heard. George downplays the group tensions which led him to walk out of the January sessions at Twickenham, even stating that the Beatles will stay together forever!
Posted by DinsdaleP at 1:29 PM