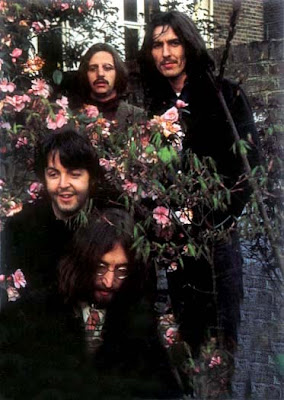 April 1969 saw the resumption of Beatle activities, with recording sessions at EMI for a new single ("The Ballad Of John And Yoko"/"Old Brown Shoe") and the beginnings of a new LP ("Something", "Oh! Darling", "I Want You (She's So Heavy)" and "Octopus's Garden").
Sessions moved to Olympic in early May ("You Never Give Me Your Money") but quickly fell apart amidst business squabbles - specifically Paul's refusal to sign a management contract with Allan Klein.
Meanwhile, John and Yoko ramped up their peace campaign again. They formed Bag Productions on April 21st, made experimental recordings for their Wedding Album, and flew to Switzerland to attend a screening of Rape at the Montreux TV festival.
On May 2nd, they discussed the film on BBC-TV's How Late It Is; two nights later, they joined Paul and Ringo at the wrap party for The Magic Christian. Sometime around May 5th, John and Yoko entertained reporters in their office at Apple HQ, pontificating about peace, art, Beatle arguments, and the still-dormant Get Back album.
Posted by DinsdaleP at 3:53 PM