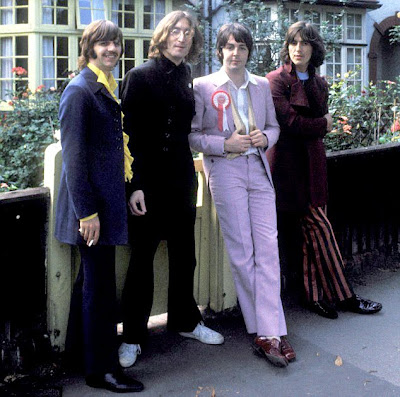 The Beatles spent most of the summer of 1968 hidden away at EMI's Abbey Road Studios recording the "White Album" and a new single. By summer's end, the claustrophobic and contentious sessions had caused engineer Geoff Emerick, producer George Martin, and drummer Ringo Starr each in turn to go on strike/holiday.
Their absence from the spotlight means a dearth of interviews from this period, but they were seen in public occasionally, including a day-long group photo shoot on July 28th at various London locations. On July 30th, they were filmed in Studio Two rehearsing and recording "Hey Jude":
Ringo's self-imposed absence lasted from August 22nd through September 2nd; he often tells the story of spending this time in Sardinia, but that actually occurred in October after the LP was completed. The Sardinian trip was spent on a yacht owned by Peter Sellers, and Ringo apparently spent his time away from the group in August compiling a tape of rough "White Album" mixes as a gift for Sellers. He closed side A of the tape and opened side B with special home recordings meant for Sellers's ears only.
John and Yoko's You Are Here art exhibition opened July 1st at the Robert Fraser Gallery in London, and they appeared live on LWT's Frost On Saturday August 24th to explain Yoko's unusual concepts. David Frost also introduced the Beatles on September 4th at Twickenham Studios when they videotaped promotional clips for "Hey Jude" and its B-side, "Revolution":
Posted by DinsdaleP at 1:55 PM