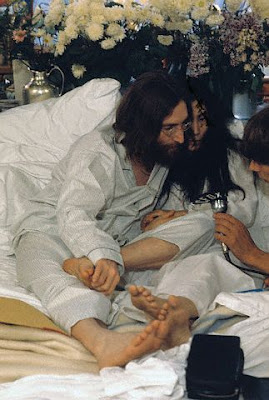 As planned, John and Yoko flew to the Bahamas on May 24th, 1969, but after one night in a sweltering and uncomfortable Freeport hotel, they realized it was an unsuitable location for their second Bed-In. Luckily, good old Air Canada came through with a flight to Toronto, which they took the evening of the 25th.
After a night at the King Edward Sheraton Hotel, John and Yoko had chosen their ultimate destination, Montreal. On the afternoon of the 26th, before checking out in Toronto, they allowed 14-year-old student Jerry Levitan to record an interview, ostensibly for his school paper.
At 10pm, John, Yoko, Kyoko, and Derek Taylor boarded a flight at Malton Airport, bound for Montreal. On board, John spoke with a CBC-TV news reporter about his intentions for the upcoming event.
The Montreal Bed-In was held in room 1742 of the Hotel Reine-Elizabeth, and officially began on May 27th. Here is a composite of several filmed interviews from that first day, conducted with Kyoko nestled in bed between her mother and stepfather.
One of the many media outlets covering the event was New York's WNEW-TV, which sent reporter Ted Kavanau and a camera crew to Montreal on May 29th. The result was a half-hour documentary with the unwieldy title John & Yoko Lennon Have a Message for the World from Their Bed in the Queen Elizabeth Hotel in Montreal, first broadcast June 6th.
Posted by DinsdaleP at 1:58 PM