Life With The Lie-Ins 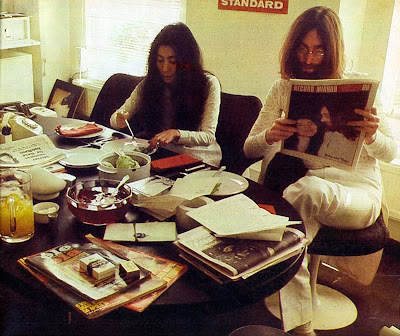 John and Yoko's second experimental LP, Unfinished Music No. 2: Life With the Lions, was released on the Zapple label May 9th (in the UK; May 26th in the US). To promote the record, and their ongoing peace crusade, the couple recorded several interviews for British radio, all from their office in the Apple building at 3 Savile Row.
On May 8th, they sat down with David Wigg for a long chat, aired in two parts on BBC Radio 1's Scene And Heard the following two Sundays. This 17-minute composite recording begins with a bit of the off-air broadcast, but is mostly from the unedited tape.
Also for Radio 1 was an interview with Pete Drummond, covered in an earlier blog post. And most likely from the same date is this in-depth conversation with Tony Macarthur for Radio Luxembourg, including a plug for the other Zapple LP, George's Electronic Sound.
Posted by DinsdaleP at 3:50 PM