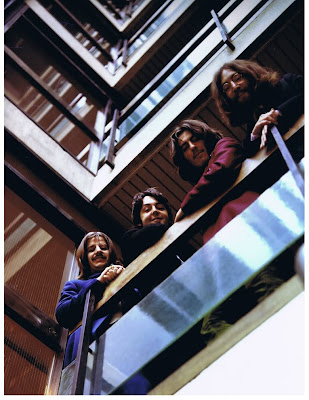 Thus far, The Beatles' output of 1969 was limited to a single ("Get Back"), with another soon to follow ("The Ballad Of John And Yoko"). But scattered sessions in Apple, EMI, Trident, and Olympic since January had produced more than an LP's worth of new songs (most of the eventual Let It Be album plus a head start on Abbey Road).
On May 9th, the group met at Olympic to hear Glyn Johns's latest mixes of the January material. The session became fractious when Paul refused to accept his bandmates' demand to sign a contract naming Allen Klein financial manager of Apple. When the others left, Paul blew off some steam at the drum kit behind Steve Miller; their jam became a single, "My Dark Hour".
Paul followed this by vacationing with his wife and stepdaughter in Corfu, prefacing the trip with an interview for BBC Radio Merseyside. On May 16th, Ringo and Peter Sellers set off to New York from Southampton aboard the Queen Elizabeth II. While waiting to depart, he was interviewed for an Associated Press newsreel, explaining that John and Yoko would be joining him if they could get visas in time.
As it happened, their requests were denied by the U.S. embassy, but they hatched plans for a "second honeymoon" (aka Bed-In #2) to be held in the Bahamas instead, where Ringo and company were currently enjoying a vacation. They described these plans in an interview circa May 24th, just prior to leaving London.
And what of George? His holiday in the sun wouldn't begin until June 1st, when he and Pattie flew to Sardinia, but in the meantime, here are two undated interview snippets from the era: George talks about his song "Piggies" and is cryptic about "Hey Jude".
Posted by DinsdaleP at 11:09 AM