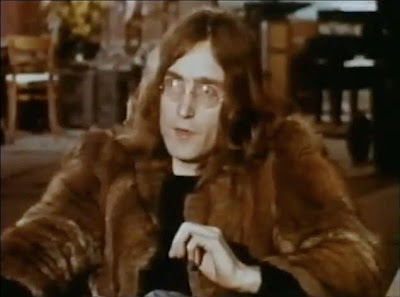 A low point in John Lennon's career was the January 1969 Get Back sessions at Twickenham, and perhaps the low point of that period was this interview. Known to collectors as "Two Junkies", it was filmed on the 14th by CBC-TV but never aired (bits have appeared in Imagine: John Lennon and other documentaries).
Whether due to drug use, alcohol, or something he ate that morning, John grew progressively greener and more nauseated as it progressed. After pausing halfway through to visit the toilet, he returned to Yoko's side and completed the interview, but it's a highly uninspiring 29 minutes to sit through.
Posted by DinsdaleP at 9:04 PM