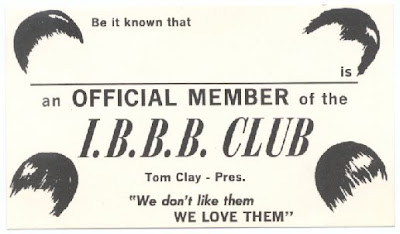 Disc jockey Tom Clay of CKLW-AM in Windsor, Ontario flew to London early in April 1964 to visit The Beatles at Twickenham Studios during filming of their first motion picture. Sometime around April 7th, he taped interviews with various combinations of Beatles (depending upon who was needed on the set).
Clay's interviews were issued on two singles mailed to "International Beatle Boosters", one in 1964 and the second the following year. Here is a composite of both recordings.
Posted by DinsdaleP at 9:56 PM