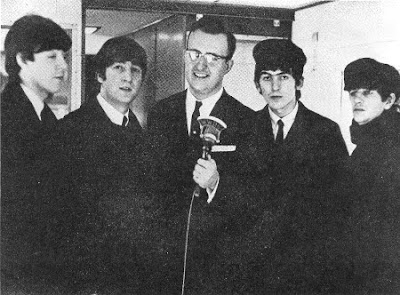 "Marsha Albert, 55, was a 15-year-old schoolgirl in Silver Springs, Maryland, when she first heard the Beatles on a CBS television report about the group's phenomenal success in Britain.

A snippet of the report had been shown on the morning news on November 22, 1963, the day that With the Beatles, the band's second album, was released in Britain, and the full four-minute version was to be broadcast on The CBS Evening News with Walter Cronkite. But President Kennedy was shot that day and CBS cancelled its regular programming.

Ms. Albert happened to be watching when the segment was finally aired on December 10. It opened with a clip of the Beatles playing She Loves You.

The next day, she wrote to her local DJ, Carroll James of WWDC in Washington, asking: "Why can't we have music like that here in America?" Mr. James, who had also seen the CBS report, got a BOAC flight attendant to bring him a copy of the Beatles' latest single from Britain. On December 17, 1963, he invited Ms. Albert to the studio to introduce I Want to Hold Your Hand. Listeners went berserk.

"The switchboard went crazy," Mr. James recalled. "They were begging us to play it again, and you know, I did something that I had never done until that day - and that was play the same song twice during my show. For ten days, WWDC was the only station in America to have a copy."

Capitol Records had not planned to release the Beatles record until January 13, 1964, and hired a lawyer to seek a cease-and-desist order. But the record label decided that it would be wiser just to bring forward the release date."

When The Beatles finally arrived in Washington DC on February 11th, they were more than willing to chat live on the air with Carroll James, who would also MC their first US concert that night at the Washington Coliseum. The result was a loose and silly interview, and even Marsha was there to meet the boys!

Posted by DinsdaleP at 5:01 PM