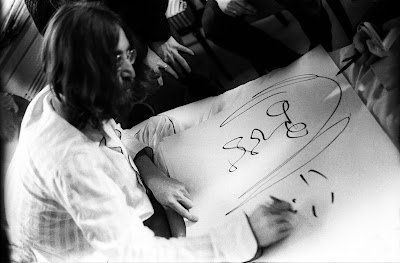 Here is another of the many interviews John Lennon and Yoko Ono gave from their room in Montreal's Queen Elizabeth Hotel during the May 1969 Bed-In. This one, conducted by Ken Seymour for CBC Radio, may have been taped the morning of the 27th, before the Bed-In officially began, according to this:

"Ken was roaming around Montreal, where he was living, looking for stories and contacts. At about midnight, he received an anonymous tip that John and Yoko had booked in at the Queen Elizabeth Hotel. At the time, they couldn’t enter the USA because of his drug convictions in Britain.

“As soon as I got up the next morning, I went straight round there,” recalls Ken, now from Saltash, Cornwall, during a visit to the museum. “I asked to see them and eventually talked to Derek Taylor (then The Beatles’ publicity officer). I think he remembered me from coverage of Ringo’s honeymoon in Hove, Sussex. He said that they’d give me five minutes, so I went in. I did the five minutes, but we struck it off so well. It was flowing beautifully.”

Ken said that was all he needed for the news bulletin, but he invited them to continue the interview for a possible documentary about their “bed-in”. They agreed.

“John was wearing pyjamas and Yoko was in a nightdress,” says Ken. “They were preparing to do the bed-in, but hadn’t yet started it."