The Walrus and the Gryphon 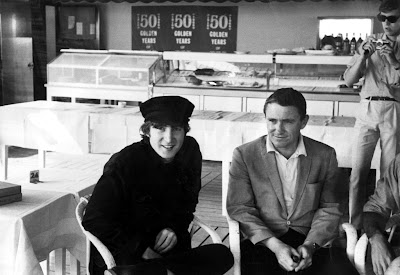 With principal photography on Help! completed, The Beatles had a chance to relax for a few weeks before setting out on a European tour.

On May 22nd, 1965, John and Cynthia Lennon accompanied Help! director Dick Lester and his wife to the Cannes Film Festival. On the 24th, just before they flew back to London, Lennon and Lester filmed an interview with Merv Griffin for his syndicated US TV show.

At some point during this hiatus, the band assembled (possibly at Twickenham during a post-sync session on May 18th) to record a rather silly interview to promote the movie. United Artists issued the result as an "open-end" recording on a promotional disc.