Shea You Love Me Too 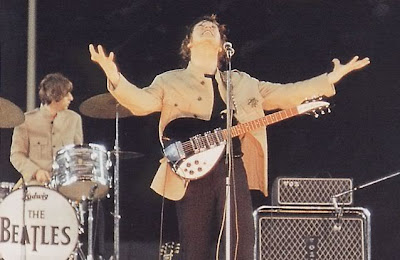 The pinnacle of the Beatles' concert career, albeit a distant and lonely pinnacle, was their August 15th, 1965 performance at Shea Stadium in Queens, New York. Before they left the Warwick Hotel for Shea, the Beatles were interviewed by "Lord" Tim Hudson from KCBQ in San Diego.

Opening acts were King Curtis, Cannibal and the Headhunters, Brenda Holloway, and Sounds Incorporated, and the entire show was filmed for a TV special, The Beatles At Shea Stadium, broadcast on BBC-TV March 1st, 1966, and ABC-TV in America January 10th, 1967.

Acting as emcees were various "Good Guy" disc jockeys from local radio station WMCA, who kept the crowd of 55,600 busy with jingle singalongs between acts. Ed Sullivan was actually given the honor of introducing the Beatles' set, and the moments that followed were captured stage-side by WABC, as well as by Jerry G. Bishop, covering the entire tour for WKYC in Cleveland.

Posted by DinsdaleP at 2:26 PM